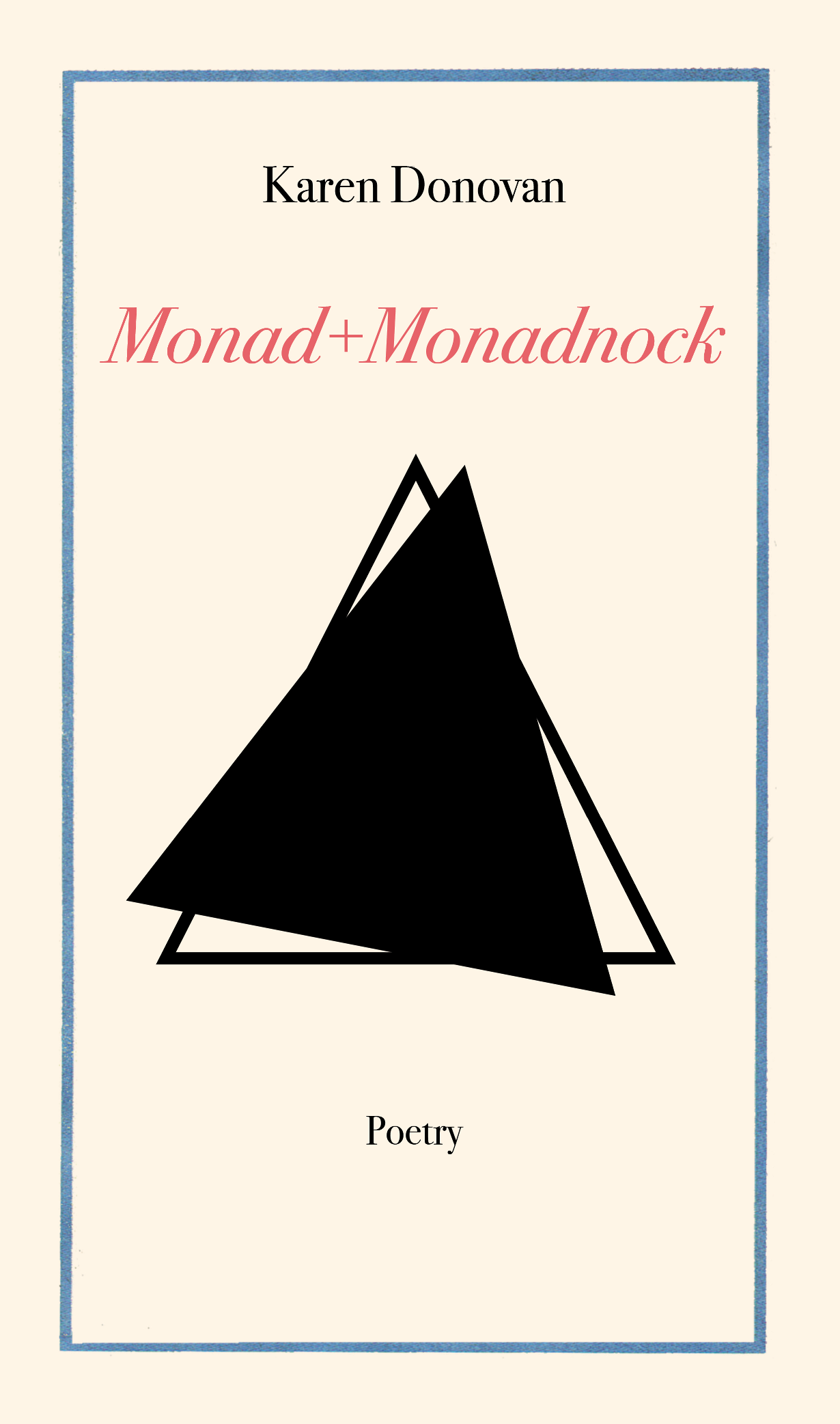 … the permutations set into motion when Leibniz’s formless metaphysical yet scientific Monad is placed in relation to Emerson’s physical yet transcendental Mount Monadnock.

In Monad + Monadnock, Karen Donovan balances a poet’s concerns with those of the itinerant philosopher. Witty and esoteric, these poems – peppered with toast and pixels, deviled eggs and eternity – leap line by line from reverence to irreverence. From oak leaves to sweeping eternities, Donovan’s manifold sensibility is a mysterious and exciting place to be – one where “creation is singing” through her poetry and equations taste “like lace.”

Reverent and saucy, equally alive to popular culture and advanced mathematics, physical and metaphysical realms, the domesticated and not – these poems will sing you into orbit, leaving you wiser to the ways of the world, which includes, in Donovan’s deft hands, undiluted wonder, “to wake mist-smoked, to dodge the sweeping estimations / of scheming bats,” and her admonishment to “minimize the elemental bizz-buzz.” This brilliant collection wants the reader to see “the flowers are real, the vipers are real.” Study up!

Interviews in In Quire with H.L. Hix + Best American Poetry with Dante DiStefano

Trio: three books of poetry ― Planet Parable, by Karen Donovan; Run, by Diane Raptosh; Endless Body by Daneen Wardrop ― bound together in one accommodating volume; three distinct and fully realized, absorbing universes that stand on their own but, here, not apart. Inevitably, serendipitously, the intelligences, preoccupations, prosodic signatures begin to reverberate and ricochet, not just for readers but for the poets themselves, who together, in an afterward, comment on the project and create an intriguing cento of combined lines. Individually, Karen Donovan’s poems unspool lyric macrocosms and microcosms with equal and precise astonishment; Diane Raptosh’s poems unveil and reclaim with intimacy the spiritual, sexual and political history of Victoria Woodhull, an American feminist purged from the annals; and the poems of Daneen Wardrop, with close and darting attention, create an intricate, syncopated network. Each of these three poets, with daring and mastery, compels on her own; together in Trio, their synergy is riveting. 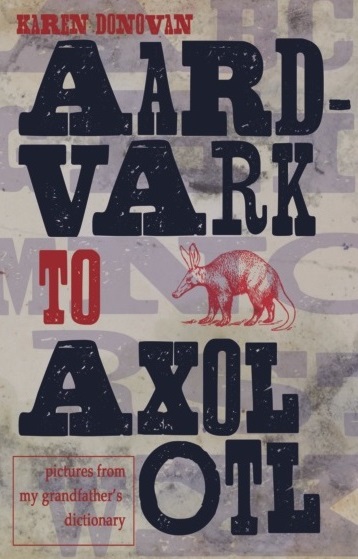 Aard-vark to Axolotl: Pictures from My Grandfather’s Dictionary (2018)
Etruscan Press

Aard-vark to Axolotl: prose poems, lyric essays, a postmodern bestiary? Who cares? Some works of literature, through the wonderful and unexpected collision of the imagination and the intellect, end up defying classification and establishing a landscape where many different genres playfully mingle to create a new genre. Karen Donovan’s book is one of these collections. Intelligent, witty, and sometimes even lyrically moving, these pieces make us believe the unbelievable, and assure us, as the narrator of this book at one point says, “Whatever happens next is going to be good.” Actually, very, very good.

I’ll save you some time. Just flip to the “index of proper nouns and terms” in the back of this here book. If you don’t want to read about, in alphabetical order, campfires, carbon-12, catastrophe, charades, The Chicago Manual of Style, and chicken fingers, then what are you doing with your life? This blurb won’t help save you, but Aard-vark to Axolotl just might.

For lovers of language, dictionaries, and magic, Karen Donovan is a balm to the soul. Her collection, Aard-vark to Axolotl, plays off of the images found in her grandfather’s 1925 dictionary, and is reminiscent of Charles Simic’s Dime Store Alchemy and Frances Ponge’s The Nature of Things. Donovan is at once clever and witty, insightful and surprising, sophisticated and plain spoken. But be forewarned: she is wickedly addictive. Once I picked up this book, I could not put it down.

Karen Donovan’s ekphrastic commonplace book is a heartfelt, tricky collection of riffs on illustrations from an antique Webster’s. Off these images Donovan bounces nostalgia and science, lust and learning, the domestic and the galactic, and then charts the resulting zigzags in lucid and lyrical near-essays, prose poems, lists, Oulipo games, and very short fictions. With a painter’s eye, a comedian’s sharp tongue, and a scientist’s skepticism, she’s rewritten the dictionary. “Words, words were what I needed,” she tells us. Little did we know how much we needed hers.

This collection reads like a genre of its own encompassing the autobiographical, the speculative, the scientific and the mythological. Spare and astringent in tone and rich in associative intelligence, each of these pieces turns out to be larger on the inside than the space it occupies on the page. There’s considerable range here, much compacted surprise and delight, much “power and thrift.” You’ll encounter mermaids and tequila, pterodactyls and Spirographs, equations and schemata, all in the context of the extraordinary ordinary. “Go to it. The book is open. There will be a test.”

As internal as they are universal, these poems are paratactic explorations into the connectivity of all things: the images and narrative fragments evoked by Old Irish runes; the false vacuum of quantum field theory; the color charts of Gerhard Richter; the caddisworm hiding until its wings have formed. . . . This is an extraordinarily rich and linguistically playful concoction.

In the middle of Karen Donovan’s new book, the speaker in one poem notes ‘How I desired a torch and you gave me / a candle saying this is all you need.’  That moment hints at the mystery and marvel of this work: it is not a torch, overwhelming the organs and the intended objects of sight, but a candle, perfecting sight by highlighting its objects and honing its organs. Your Enzymes Are Calling the Ancients is all you need to see more clearly than before.

Borrowing from the vernacular of science, but distilling her language into cadences and shapes familiar to a quotidian tongue, Donovan’s poems are accessible yet deftly layered inklings into the peculiar narrative of exile.

Visual discoveries abound in these poems. Objects of interest come into focus, blur, vanish, and bloom back into clarity or transform into other resonant objects. Endowed with the curiosity of a child, Donovan marvels at found coins and lost stars, scraps of conversation, even a jar of pickled eggs at the grocery store. Her restlessness and curiosity make travel a necessity rather than an indulgence, and she never treks to the same place twice.

Poet Karen Donovan is an explorer of a strange new land, most remarkably, one which lies in our own backyard. She is a scientist-navigator of words, searching both distant ports and crumbling main streets, furiously scribbling the most intimate details of the world through which she sails.